My Experience Behind Closed Doors In A Precious Metals Vault 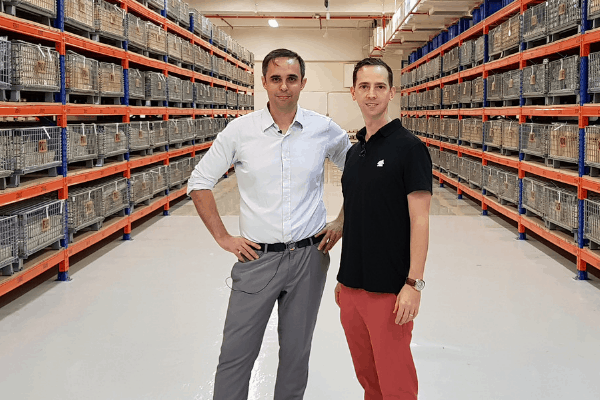 From the Middle East to Singapore

I landed in Singapore the night before my meeting with the team at Silver Bullion, checked into my hotel, had a bit of food and started to prepare… I called to make sure the film crew was all set for the following day, I reviewed my questions I had been preparing all week and more than anything I tried to shake the jetlag so I would be well rested for what was to come…

The alarm went off way too early the next morning, I showered and shaved, listened to an interview of Gregor Gregersen the CEO of Silver Bullion on BBC World News – he’s the founder and brains behind the Vault I was getting a private tour of that day.

I ordered an Uber before I left my room, grabbed my stuff and headed for the door Passport in hand…

To stay calm I did a bit of filming in the car talking about how I was feeling and my excitement to be invited for such a rare look behind the scenes of one of the safest private vaults in the world for precious metals.

My Uber driver and I couldn’t even find the place on Google Maps. I am guessing they didn’t want people to know the location, so even with an address, we got a little lost. Luckily I was early and didn’t get too stressed. When we pulled up to the nondescript looking building there were no signs to identify it. I rolled down my window and asked the Singaporean security guard if I was in the right location. She assured me I was, and within two minutes Gregor Gregersen appeared outside to great me. A quick handshake and we were past the first line of defence.

We walked up a ramp and entered the building where straight away I surrendered my Passport through a small drawer that was pulled back into a private room. Through the thick bulletproof glass I could see three armed guards, they smiled at me as I chatted to Gregor about my flight over. I hadn’t noticed but when we entered this small room the door shut behind me and there was no way to get out. The door could only be opened remotely from within the guard room.

Gregor would explain to me later that this is what is called a “Man Trap”, that the second door could not be opened until the first door was locked securely.

After a couple of minutes, the guards had photocopied my passport and the second large door opened for us. We continued our conversation while we waited for my film crew to arrive.

Past the first line of defence

Gregor chatted openly about the insurance procedures for the Vault. How the boutique insurance they had obtained covered the patrons of the vault from every conceivable form of loss you could imagine (and many you would never imagine).

They had even been able to get approved for a clause he called “mysterious disappearance”.

Which basically acts as an overall blanket policy to cover you for things that are unexplainable, so if something happened to your bullion, but they couldn’t figure out what it was you would still be covered.

There was a small locker room close by where I shed my bag and wallet. By this time my film crew had arrived and Gregor was getting mic’d up. A couple voice checks later and we were ready to go.

We got introduced to the rest of the team, close to a dozen staff warmly greeted us.  I had spoken to a couple of them in the months leading up to this trip via email and it was lovely to put faces to names finally.

They told us how all the employees who work for Silver Bullion are actually partial owners of the company and there is extremely low turn over for the staff. They all trust each other and behave more like a family than anything else. Gregor explained that the loyalty is actually another security measure, that he studied other vault companies and in a lot of incidences of theft there was a staff member involved.

We passed through a large gated door that looked similar to something you might see in a prison movie. Strong steel bars running floor to ceiling.

We started filming and I interviewed Gregor about the receiving process for all metals that enter the building. Gregor’s background before Bullion was programming so he basically created a uniques system for all parcels of bullion and people that enter the premises.

The interesting thing is that instead of looking at the systems that other vault companies have in place he went out there and decided to build something from scratch based on today’s technology and custom installed the entire thing himself. I suggested a patent on the technology…

In front of me was a massive Vault door that looked straight out of a James Bond movie.  It was about 8 feet high and 8 feet across, round in shape with a big wheel on the front. One of the staff swiped a keycard to the side, I turned the handle and gingerly swung the door opened.

The Actual Vault Door Itself Looked out of a Movie

They explained, to be gentle.  The door weighs thousands of kg and there is a delicate sheet of glass on the inside that holds back giant rods. If they release the door, it shuts permanently. This is to protect against a burglar who tries to drill the lock. If you swing the Vault door too hard you could accidentally break this glass.

On the inside of the door, I noticed 3 small manual clocks, when I inquired what these were I was told it was a time lock. That it was impossible to open the door before 9 am or after 6 pm. So even if someone knew the combination or had the key card they could not open the door during the night.

This massive door was Class One, meaning that if you had the best safecracker in the world, with the best equipment in the world,  it is still guaranteed to take a minimum of 30 minutes to open the door. And considering there is a police station 4 minutes away, it is unlikely they would even get their tools out of their bag before they were overrun…

After the main vault door, there was what is called a “daytime door”. This they open and close when they pass through during normal operations. Another security scan and we are in the main vault.

If you have ever seen vaults on TV and it looks like a small room with boxes against the wall then this is 100% different… this looked more like a warehouse. With giant racks and cages of bullion stacked 40 feet into the air. Huge rows of bullion piled on top of one another. There are pallets with thousands of 30 kg bars of silver stacked against the wall. 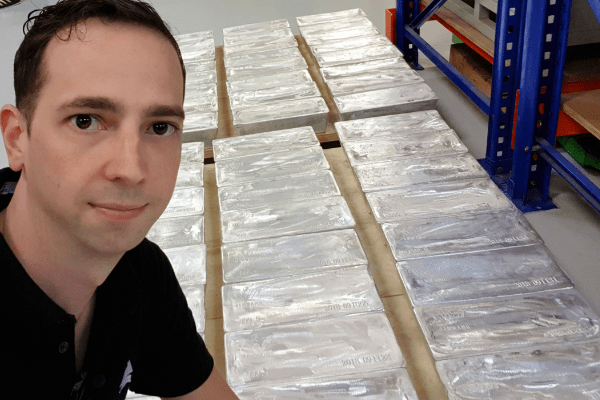 At any one time Silver Bullion stores upwards of $300,000,000 worth of precious metals, it was quite a site!

Each one of these cages Gregor explains weighs roughly a thousand kg. They are packed so closely together that you cannot open one to pull out the contents from within. To access these you need to use a specially designed forklift to retrieve them.

And anything you could carry like coins is up on the top shelf, maybe 30 feet up.

Gregor explains the security cameras, motion sensors and lasers that line the wall… of course all state of the art.

I asked him if someone could just come through the wall or vent and skip the vault door entirely? He explained that this building was originally meant for building microchips and the walls are extremely thick, there was only one way in and the entire place is sealed to make sure no dust enters. Anyways he says, we have seismic readers to detect vibration. If someone tries to tunnel through the wall they won’t make it an inch before the alarm sounds.

Around the corner, Gregor brings me to a giant section that has floor to ceiling safety deposit boxes, but these look more like massive steel suitcases, there are digital locks on each one and they all have numbered seals in place. They hold up to 200 kg of precious metals, and if you disclose what is inside it to Silver Bullion it is also covered by insurance.

I should also point out that everything in this vault is considered the private property of their customers. The Vault owner is a custodian, and under no circumstance could it ever be seized even if the Vault itself went into default or a foreign government tried to gain access to the metals stored here. They are not subject to US law and if you were sued and a judge demanded you to forfeit your property,  Silver Bullion would not comply.

A Vault Inside A Vault

After this, we approached a second massive Vault door. This was a Vault inside a Vault. And this door was a Class Two door. Remember when I said that even under perfect conditions the main door would take a minimum of 30 minutes to crack? Well, this door is even more secure and is guaranteed to take a minimum of 60 minutes.

The walls of this Vault have a center filling of incredibly fine powdered metal, that if you tried to drill or cut the wall the powdered metal would fall and instantly seal the hole, it would also jam your equipment and make it impossible to continue. 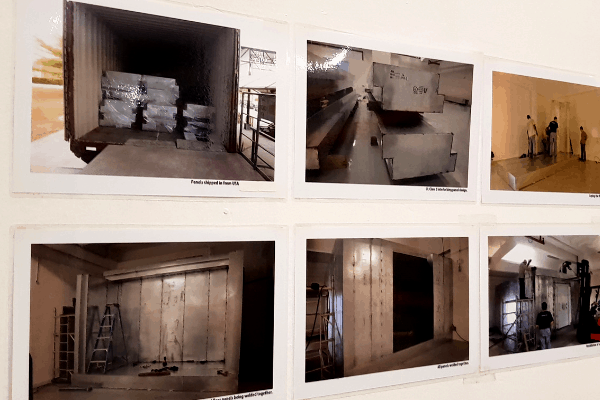 (Building the Class Two Vault at Silver Bullion in Singapore)

The pieces that make up the walls here were formed in what was described to me as giant Tetris blocks, they fit together perfectly and it would be impossible to even fit a piece of paper in between one of them, so good luck ever trying to slip a camera into the room.

After they let me swing open the Class Two vault door (which was very cool) we walked up the steps and entered a room with hundreds of safety deposit boxes. They unlocked one and pulled it out for me to see. 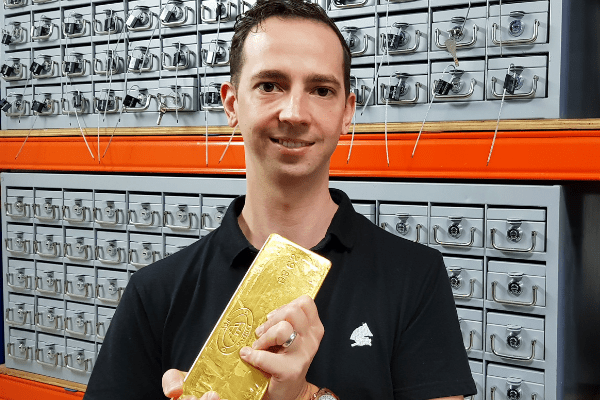 (Mikkel Thorup Pictured Here Holding Half A Million In Gold)

I hoisted it up and took a silly amount of pictures holding the thing until my arm got tired and I had to give it back.

My experience with Gregor Gregersen from Silver Bullion was unbelievable. I feel incredibly secure about storing my Bullion with them and am very grateful to get a glimpse behind the closed doors of one of the most secure precious metal Vaults in the world

If you want to learn how you can set up a free account with their company and purchase Gold, Silver, Platinum or Electric Vehicle Metals that I talk about in this Special Report then I suggest visiting their website directly by clicking HERE.